Other noteworthy things to see in Treviso Italy

The beautiful Church of San Nicolò (accent on last o), one of the most significant monuments of the town, dates back to the late 1200s.

Take a look at the nearby former Convent of San Nicolò. Take advantage of the free visit to the cloister and most of all to the Sala del Capitolo, decorated with fine and precious 1300s frescoes representing 40 of the most illustrious friars belonging to the Dominican order.
Interesting is the fact that one of the friars is depicted with a pair of glasses on: it is about the first representation of glasses in the art history.

Last but not least, don’t miss the most suggesting corner of the town: the so called canali dei Buranelli, or Buranelli canal. It takes its name from Burano, one of the islands of Venice, as the merchants coming from Burano would get there with their boats. Treviso was connected to Venice through a thick network of canals, but unfortunately nowadays many of them are filled in. 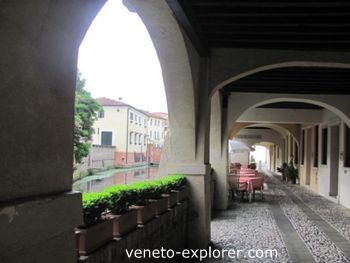 A few steps away take a look at Piazza Rinaldi, a beautiful square lined with 1500s palaces.

This area is the authentic Treviso, dotted with hostarias and typical food and wine stores. Upon a small island lies the fish market (pescheria).

Nearby you can admire two ancient water mills: they are what is left of a series of water mills that were in the historic centre of Treviso.

If you like to discover charming towns you should not miss during your Veneto holidays the city of Vittorio Veneto, a very ancient town in the Treviso province, full of atmosphere and surrounded by a lovely hilly landscape.

Another interesting town in the Treviso province is Castelfranco Veneto , a medieval walled city with imposing circular walls and ramparts.

Another interesting destination in the province of Treviso Italy is the charming archaeological small town of Oderzo , rich in pre-Roman and Roman finds.

Have your say about what you just read! Leave me a comment in the box below.
Copyright 2010-2013 © Veneto-Explorer.Com Site Policies Protected by Copyscape